Would you expect a group of all-star athletes from different teams to make magic the first time they stepped on the court together? Imagine all the factors that might keep them from working seamlessly as a unit: conflicting communication styles, difficulty predicting their teammates’ next moves, a lack of clear roles within the team, and more.

Bringing together action-oriented people from different industries to execute a project yields a similar set of variables to consider. I went behind the scenes to speak to members of an Ion team that have experienced a wide range of these variables in their effort to create a meaningful community project within the last half of their program, three months, on a volunteer basis, and with no budget. As their project, they decided to organize a Diversity and Inclusion Workshop on Nov. 14. Now that their event is just around the corner, it’s crunch time for this group of government, tech, and non-profit sector leaders who have never worked together before. The clock is ticking and the pressure is on to execute.

“At some points it can feel frustrating. It’s been a process. Essentially they asked us to leave our titles and come into the experience fresh.”

“At some points it can feel frustrating,” a team member said. “It’s been a process. Essentially they asked us to leave our titles and come into the experience fresh.”

The group is comprised of people who have experienced a high degree of success in their respective fields, so coming onto the team as a blank slate is a big ask.

“In my organization, I have a fair amount of stature and power,” said another teammate. “And when I show up at Ion I’m just one of the six people on the team.”

The team’s coach, whose experience mainly lies in working with high schoolers, was an Ion Collaborator herself last year. In the true spirit of Ion, which is first and foremost an experiment in collaboration, she decided to make herself a part of that experiment by trading in her jersey for a whistle and coaching adults for the first time.

“Leading leaders is a lot different than leading a group of students,” she said. “It’s a different challenge…We tried to get them to solidify roles but that wasn’t super successful.”

She attributes some of the team’s difficulties to the members’ generally high status at their day jobs.

“They tend to have really great ideas but not so much ways to get down in the weeds and execute those great ideas,” she said.

The team’s idealistic tendencies have sometimes complicated the decision-making process, making it harder to meet their monthly deadlines and goals.

“I think the hardest part has been trying to follow the rules of the program,” said a member. “We would just get so circular it was hard for us to get moving on something.”

During the first few months of Ion, the team went through hours of training and activities aiming to eliminate biases against each other. However, that hasn’t stopped some of the team members from forming judgments about the different sectors represented in the group. Some people I spoke to said that differences in culture among sectors play a significant role in the rate at which the team gets things done.

“I don’t want to stereotype, but that’s something within the team that we’re working through: different sector paces.”

“I don’t want to stereotype, but that’s something within the team that we’re working through: different sector paces,” said someone on the team. “Some work really quickly because within their sector there’s a need to pivot quickly, and others don’t.”

“I’m from a startup so I have to move really quickly, because in the startup world you have to make decisions and move fast,” they said. “A lot of government workers were having a hard time with that.”

The team lost a member right when they needed to determine the nuts and bolts of their project. The loss hit the team hard, because they saw the member as a key player before she started getting increasingly disengaged.

“In the past, we’ve asked the departing team member to tell their teammates directly, voice-to-voice, so they have a chance to get some closure and for there to be a discussion. For a variety of reasons, we weren’t able to do logistically that this time,” said Julie Pham, the WTIA Ion program lead. “The team member who dropped said goodbye in-person later on, but the damage had been done with our hasty transition.”

“It was destabilizing,” a member said. “She dropped out right when we were really struggling to figure out what our project was going to be.” 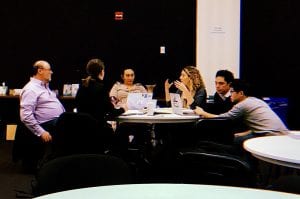 The coach quickly added a new team member whom she’d known previously, who worked in the same sector as the collaborator who left the team. She identified the new member as someone who would bring a high level of energy and commitment to the team. The choice to not consult with the collaborators didn’t go over very well.

“They didn’t talk to us about it,” a member said. “We were at the part of the project where it was going to be a sprint, and all the sudden we just got a new person with no discussion…Frankly the first question should have been ‘Do you even want another team member?’”

The coach said that she made the executive decision to save time, but in retrospect she might have involved the team more.

“They’re a team of leaders, so they’re used to being a part of the decision-making process,” she said. “This was a valuable lesson for me in terms of knowing my audience and what’s important to them.”

Bringing someone new onboard has shifted the inner architecture of the team. Since the original collaborators got to know each other through four months of activities, training, and conducting interviews together prior to her joining, the newbie is still something of an outsider.

“I wish I understood my team’s dynamics a little bit more. I was kind of just thrown in the fire,” she said. “Luckily I’m used to that, so I wasn’t perturbed by it.”

Because she is so comfortable with the particular work the team has chosen to do, she’s taken on the brunt of responsibilities. From her point of view, she’s making her teammates’ lives easier by putting her expertise to use and taking decisive, direct action. However, some are frustrated that the collaborative aspect of the team has diminished. Someone I spoke to was unsure if that was really a priority for WTIA.

“Collaboration involves a voluntary meeting of the minds and a willingness to work together. It’s not just being in command to someone else.”

“Collaboration involves a voluntary meeting of the minds and a willingness to work together. It’s not just being in command to someone else,” a team member said. “I think it would have been fine if it was a B minus event and we all felt proud of it, but the program lead might want the A plus event.”

“The number one thing that the WTIA organizing team is constantly monitoring among the Ion teams is morale. The success of the project is secondary,” said Pham. “If the team feels good about what they are doing, then we think that’s success. We didn’t communicate that well at all. And we went from one extreme – a very disengaged team member – to another extreme: someone with a strong, take charge attitude. We didn’t give people time and space to discuss transition options. Along with the coach, I regret not communicating better the reasoning for making the replacement.”

The new member is aware that her reception hasn’t been entirely positive, and sees some of the pushback as resulting from her being younger and junior in her career.

“We all come with our own unconscious biases. These problems are inevitable.”

“We all come with our own unconscious biases,” she said. “These problems are inevitable.”

In the meantime, planning for the Nov. 14 event has exceeded all expectations. “I kept telling the coach, you should let your team know that they’ll be lucky to get 20 people registered with a 40% drop out rate,” said Pham. “Now I have people emailing WTIA to try to get into the event.”

The event has capacity for 60 and there’s currently a wait list of 60. It sold out in less than a week after it was posted. Pham said, “As far as we can tell, the registration has been so high because the team is promoting it to their diverse networks, people who normally wouldn’t go to the same event.” It will be held at SEIU 775, the first time a WTIA-sponsored event has been organized at the home of a labor union.

It seems that with the buzzer close to zero and their event date fast approaching, the added pressure has helped the team push differences aside and find a new rhythm.

“It did feel like we sunk a little, but we pulled ourselves together,” a member said. “Now we’re running full speed ahead.”

Before the coronavirus pandemic, we took for granted how easy it was to connect with…

Cohort 5 of the Ion Collaborators Graduates

In Seattle, there is a pervasive narrative that the city is divided by the haves…

On August 28th, the members of Ion’s fourth cohort gathered at the Ionosphere, Impact Hub… 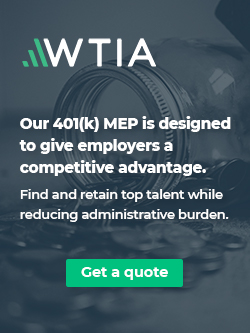 Receive updates on the latest blog posts directly to your inbox every Friday!
Subscribe Now

Do you have a perspective on the tech industry that you'd like to share?
Become a WTIA blog contributor
Stay in the loop by signing up for tech industry news and local events tailored to your interests, brought to you by WTIA.
KEEP ME POSTED
Copyright 2020 - All Rights Reserved
Back To Top